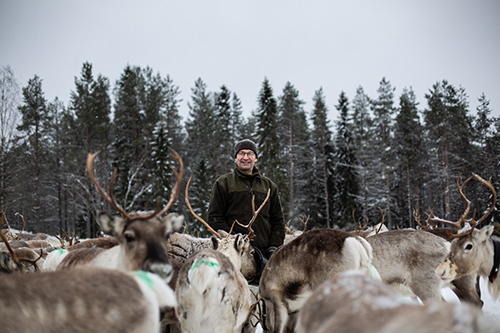 The film does not only tell about the ancient profession of reindeer herding in Finland, it also showcases the severe effects of climate change on the every-day life of people in Northern Europe. 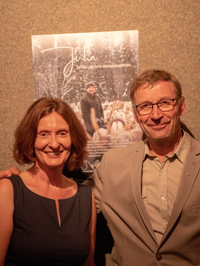 Executive producer and creative supervisor of the documentary, prof. Katja Schmid and Juha Virkkunen.
Prof. Katja Schmid from HdM came up with the idea for the documentary while participating in the International Teacher and Staff Exchange Week at OAMK in 2018, which included a visit of Juha Virkkunen's farm near Taivalkoski, a small municipality in north-eastern Finland not far from the Arctic Circle. While reindeer farming has been a very common profession in this region for centuries it has become quite unusual in this day and age. Although reindeer remain one of the main sources of income in northern Finland, Virkkunen is one of the last reindeer herders of the region. Virkkunen's life, his cheerful personality and his deep knowledge of the local traditions, which are nowadays drastically challenged by both modernization and the effects of climate change, inspired prof. Schmid to create a documentary about Virkkunen.

Together with her colleague Prof. Karoliina Niemelä from OAMK, she set the collaborative movie project in motion and assembled a crew of film students from OAMK and HdM, many of whom were working internationally for the first time and eager to throw themselves into the planning and pre-production of the documentary. A few months later, in April 2019, the international crew travelled to Virkkunen's farm in Taivalkoski to shoot the documentary.

Family Virkkunen and the international film crew.
In spite of the frosty weather conditions, the students recorded about 33 hours of raw material in only 11 days of filming. Apart from the cold and the snow masses, it was especially the reindeer that proved challenging to be captured on film: "The material about the reindeers in wilderness was authentic and planned by the reindeers themselves," Virkkunen laughed. After the filming was wrapped up, the post-production of the documentary could begin. With about two months left before the official premieres, the students hat to turn more than 30 hours of material into a 30 minute documentary. Since the students had to return home, the team also had to bridge the distance between Finland and Germany.

Just in time for the end of the summer semester, the documentary was cut and ready to be presented to the world: "Juha - in the life of a reindeer herder" premiered both in Stuttgart and Taivalkoski in the first week of July in sold out movie theaters. The documentary was well received by the audience, filling up the theatre with emotions and laughter and making a lasting impression on the viewers by demonstrating how the effects of climate change are rapidly changing a century-old tradition. "The movie was thought-provoking and deeply touching. A movie, that looks a lot like Juha." Anneli Pulkkanen, the Vice Chairman of the Taivalkoski Municipal Government and a guest at the Taivalkoski premiere, described the mood. The whole international production team was attending the premieres, including the star of the documentary himself. Juha Virkkunen even gave a short interview after the screenings. The reindeer herder was amazed by the enthusiastic reception of the documentary and the interest of the audience in his lifestyle and his views on climate change and continued to answer questions long after the official interviews. The other members of the film crew were just as excited about the positive reception of their documentary and very happy that their project turned out to be a success.

Juha - in the life of a reindeer herder // OFFICIAL TRAILER from Katja Schmid on Vimeo.