Visions of Space and Time

The print products of the "Visions of Space and Time" project prove that the use of cutting-edge technologies and innovative materials in the production of future-oriented print media is technologically sophisticated and also convincing in terms of design and feel. Students at the Hochschule der Medien (HdM) implemented this project as part of an interdisciplinary course in the Print Media Technologies bachelor's programme. 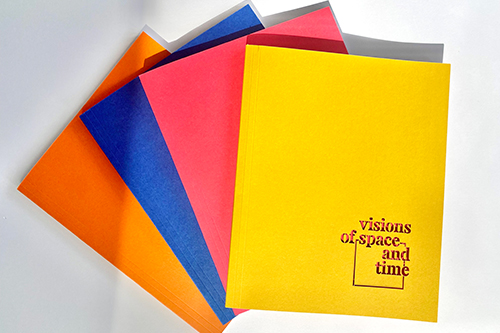 The project "Visions of Space and Time" was created as part of the interdisciplinary course "Campaign management". It involved 61 students from the bachelor's degree programs Print Media Technologies, Media Business, Crossmedia Editorial/Public Relations, and Advertising and Market Communications. "The project is a 360-degree campaign that includes the following elements: The production of an image book, the creation of a store concept and a website, and the creation of an Instagram channel," explains Prof Dr Volker Jansen, Dean of Studies in the Print Media Technologies program, who supervised and guided the project, together with Sebastian Paul and Özgün Erbaristiran, both employees in the Print Media Technologies program. In the project, the students learned how to implement innovative media products using the latest technology.

The subject of the 360-degree campaign "Visons of Space and Time" is the organisation "DAS KAUFHAUS," an institution of Neue Arbeit gGmbH, which operates several social second-hand department stores in the greater Stuttgart area. The goal of the KAUFHAUS is that used goods are not thrown on the garbage, but are recycled, that everyone has the opportunity to buy inexpensive second-hand and new goods for little money - no matter whether it is clothing, furniture or other commodities. The campaign is intended to help introduce DAS KAUFHAUS to a wider audience and thus attract new, younger and also more affluent customers.

From the idea to the finished product

First, the students created a concept and developed a corporate identity with fonts, colors and patterns for the KAUFHAUS. Planning and implementation then continued in six different groups, such as marketing, store concept or production. The book is the result of the extensive design, layout and printing project - accompanied for the first time by the realization of a store concept.

"Visions of Space and Time" creates a completely new, youthful and futuristic image for KAUFHAUS through aesthetic photos and clever texts. The content and vision of the book are conveyed through vivid projections in four color narratives: Blue represents the social aspects of KAUFHAUS, community and humanity. Purple embodies uniqueness and encourages everyone to express their own personality. Orange is a call to stand up to corporations, to shop even in the small store around the corner, and to empower people with different ethical and social backgrounds. Green is about raising awareness of the sustainability and longevity of things and products. After all, everything we do today has an impact on the future. The book is captivating in terms of content and feel - the title was engraved on the cover with a laser.

The students received support from media professionals: British author Andrew Weale contributed the texts for "Visions of Space and Time". Professional photographer Wolf-Peter Steinheisser and his team consisting of Moritz Metzger and Arne Steinheisser implemented the photo shoot and took care of the post-production of the images. The models were the students themselves. They were made up for the shoot by make-up artist Rahel Teubert. Dieter Soldan, designer and head of the communications agency Soldan Kommunikation, was also on hand to advise the students.

The camapgne included the creation of a physical store concept, in which the students were supported by the retail agency DESIGNPLUS. This included, for example, new concepts for the design of the store windows of the KAUFHAUS, a new design for the store floor and new clothing concepts for the employees. The students also gave the changing rooms a new look and designed a corner for Instagram selfies, where customers can take pictures of themselves shopping in front of different backgrounds and then share the photos on Instagram. Another book has been produced to accompany the store concept, which brings together all the students' ideas and gives KAUFHAUS recommendations for action in terms of sales space, customer orientation and sustainability.

"Overall, the project was very elaborate. We carried out the majority of the course and the associated project tasks in presence at the HdM, of course with an appropriate hygiene concept and in compliance with all HdM safety requirements. Most of the students were at the university for the first time after three semesters for this project. This way of working was very inspiring for them. And they did an excellent job - together with the professional support," Jansen praises the team.

Other supporters included METAPAPER for cover and content paper, Zeiss lenses for photography, HP for digital printing, MüllerMartini for perfect binding, Baumann Wohlenberg for the paper cutter and Meccanotecninca for thread sewing.