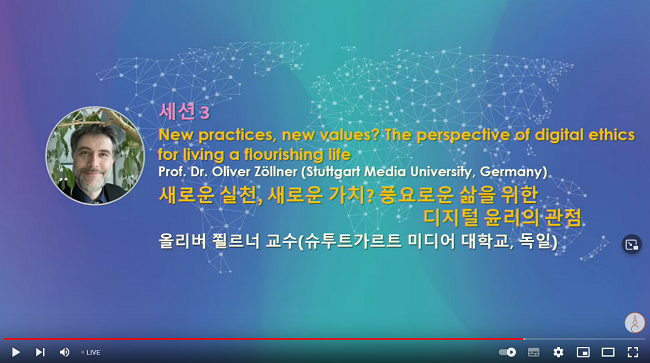 Western Aristotelian approaches of ethics aim to empower people to make appropriate decisions for action in private or professional contexts that contribute to a 'flourishing life' for the individual as well as for society. It is not only in the mediatized and increasingly digitized everyday world of the early 21st century that people ask themselves how they can deal appropriately with the multitude and diversity of information channels and content. The most obvious example of these enormous challenges in everyday life is the ubiquitous portable computer, the smartphone, with its numerous applications that   ̶  e.g., for purposes of online dating or managing social relationships via social media   ̶  have become a "new normal". The digitization of pretty much everything is in full swing. Moreover, the processing and algorithmic evaluation of huge amounts of data poses new challenges in private lifestyles as well as in everyday dealings with privacy, identifiability, control and surveillance.

Against this background, the question of the ethical contours of this increasingly intensified mediatized life arises again and again. Digital ethics aims to provide people, both as media users and as media producers, with a reflective competence in dealing with problematic cases of everyday media/digital practice in a value-oriented manner. This can be understood as a process of negotiation in which the outcome is by no means a foregone conclusion.

In order to make the complex field of media ethics manageable in practice, especially in digitized contexts, Charles Ess, in his book Digital Media Ethics, proposes several analytical frameworks of ethics, from which three Western ones have been selected for this presentation: a) consequentialism (as a manifestation of teleological, purpose-oriented ethics looking at outcomes of an action); b) deontology (or duty ethics   ̶  the things people ought to do in the context of higher, absolute orientations); c) virtue ethics (focusing on human dispositions striving towards excellence of the mind). All of these approaches have their origins in classical Western philosophy and have been further developed in later centuries. They have also had a recognizable influence on Christian conceptions of ethics and are therefore well suited for integration into religious debates.

a) Consequentialist approaches essentially ask what moral value an action has in view of its consequences in certain situations or contexts. The expected consequences of the action  ̶  for example, the advantages and disadvantages of using a medium or a digital application  ̶  are to be weighed against each other. A decision must then be made about the appropriateness or justifiability of one's own action. An example from everyday life would be the question of whether or not to use the messaging service WhatsApp with its partly dubious and non-transparent data protection provisions; or the question to what extent, for example, calling up pornographic or violent videos on YouTube might actually encourage their production in the first place.

b) Deontological approaches try to grasp promises made about rights and duties with a view to one's own actions. These promises are to be understood as absolute, higher qualities, i.e., they cannot be determined by considerations of utility. Rather, in a deontological framework of analysis, it must be questioned whether, for example, granting WhatsApp the right to access not only its own communication data, but also the personal data of others (e.g., giving access to the address book of the smartphone with all stored phone numbers of third parties) does violate implicit promises of confidentiality and protection of such data. Or in the case of YouTube, the focus would be not on how entertaining or seemingly "free" this service might be. Rather, in a deontological framework of analysis, we must ask to what extent YouTube users have a duty to curb the distribution of problematic, transgressive videos, for example by refraining from viewing, commenting on, or deliberately not forwarding them, in order to at least hinder their general distribution and easy availability.

c) Finally, virtue ethics emphasizes human relationships, that is, wo/man as a social and learning being who endeavors to strive for "excellence" in everyday practice, that is, case by case. This means that humans try to become aware of higher values and apply them in their own actions in order to surpass themselves, i.e., to go beyond themselves. In the case of WhatsApp, this would include reflections on the appropriateness of permanent communicative accessibility that comes with the pricetag of a depersonalizing detachment within digital interactions. The question thus might be: is this how I want to live my life? Are privacy and autonomy to be seen as higher values? Regarding YouTube, the focus would be on reflecting on the questions of why, as media consumers, people would want to see a hurtful or violent video in the first place, why they feel motivated to spread it further on the Internet by commenting on it, via "likes" or "dislikes," etc., and what this means for their relationships with fellow human beings.

... increasingly in need of aligning themselves with Eastern approaches

In the age of digitality, these approaches need to be seen in the context of a "relational self", that is, a new self-positioning of the human being no longer focusing on classic (Western) ideas of autonomy and individualism, but increasingly taking into account concepts of Eastern philosophy (especially Buddhism) and their worldviews of a holistic, interconnected "oneness", and loss of self. These ideas were speculatively foreshadowed and popularized in the West by Canadian media theorist Marshall McLuhan already in the 1960s, drawing on the writings of Japanese Buddhism and Zen scholar D. T. Suzuki. In addition to this, ethical concepts leaning to the Confucian tradition emphasize hierarchy and obedience to authority which is an orientation that, from a position of Western individualism, seems partly problematic in view of its ideological instrumentalization by dictatorships such as China, and the renewed adoration it gets. To what degree such an ethical framework points at a good life in digitality remains to be carefully evaluated.

The discussion pointed out that freedom and human rights are universal values that must not fall victim to relativism, cultural, political or otherwise, and that a new global interconnectedness needs to pursue the quest for truth (as difficult as this is) and respect for fellow human beings (both in the modes of physical presence and digital distance).

Reconstructing Future Visions from the Past
eingestellt von Oliver Zöllner